Day 01: Delhi
Upon arrival our representative will meet you at Delhi international airport and escort to the hotel for assistance with check in process. Delhi, the capital city of India, is located in northern part of India and sets on the bank of River Yamuna. The city has its own historical importance for the fact that it has been the home to Mughal Empire for a long time; its rulers had built some magnificent monuments here. Overnight stay is at hotel in Delhi.

The stroll around the ethnic and royal lane of Old Delhi famous for its vivid shops recognized as Chandni Chowk, then sight the Red Fort from outside. Move on towards Raj Ghat, the crematory place of father of nation “Mahatma Gandhi”. After lunch head towards New Delhi and enjoy the visit to Qutub Minar, one of the most admired familiar sight in Delhi constructed in 1199.Humayun's Tomb the majestic structure reflecting the style of Mughal architecture. Later drive through the stunning Rajpath while saluting the passing by India Gate – the memorial constructed to observe the unidentified armed forces. Also enjoy the sight of the President Palace, and the House of Parliament while driving. Enjoy the pithy interval from the lively city at Birla Mandir, a modern and colorful Hindu shrine. In evening back to the hotel for night stay at Delhi.

Day 03: Delhi – Mandawa (250 kms / 05 hrs)
Drive to Mandawa, the city of old havelis & structures. On arrival check in at the hotel and later in the afternoon take a short trip to beautiful village of Shekhawati region, you will be fascinated at the brilliant architectural style of the numerous havelis built during 18th and 19th century by the rich merchants as their residence. The colourful frescoes and murals on the walls and ceilings of the various havelis make this place an open air art gallery. Some of the popular havelis are Goenka Chattri, Jhunjhunwala Haveli, Gulab Rai Ladia Haveli, Goenka Double Haveli, etc. Overnight stay is in Mandawa.

Day 04: Mandawa – Bikaner (190 kms / 3:30 hrs)
Morning leave for Bikaner, upon arrival check into your pre booked hotel. Bikaner was founded in 1488 by Rao Bikaji son of Rao Jodhaji the founder of Jodhpur. In earlier times Bikaner had been a major trading route and today it is a prosperous city being visited by loads of travelers every year. There are some amazing forts and palaces showcasing the royal heritage of this tour. Move on for the city sightseeing tour of Bikaner which takes you through the popular tourist sites here which includes Junagarh Fort - an enormous fort, it has a long wall with 37 stronghold and 2 entry access points. Next visit Lallgarh Palace a masterpiece in red sandstone built by Maharaja Ganga Singh in memory of his father. Also visit Bhandeshwar Jain Temple, the temples are delightfully imprinted and the walls illustrate many pictures. Later visit the various Havelis of Bikaner which are also wonderful architectural pieces. Evening enjoy delicious Bikaneri food and sweets. Overnight stay is in hotel.

Day 05: Bikaner – Jaisalmer (330 kms / 5 hrs)
After breakfast leave for Jaisalmer, on arrival check in at the hotel and relax. Jaisalmer is the desert city of Rajasthan, it is well known as the Golden City. It is an ancient city and because of its strategic location on camel trade route it was used as a trading centre. In the evening, you will reach Jaisalmer. The sunset view is very beautiful which cannot be bind in words. Dinner and overnight stay will be at the hotel at Jaisalmer.

Day 06: Jaisalmer Sightseeing
Today after breakfast visit the older city of Jaisalmer & view the great Jaisalmer Fort, constructed by Rawal Jaisal in the year 1156, it is also known as Sonargarh Fort due to its Golden appearance. Suspended on 80m elevated mount, accommodating the whole town inside its walls, the golden Fort is repudiating resembling a lookout in the miserable desert background. Also visit architectural finery Patwon Ki Haveli placed in the spirit of the city. It was constructed by the wealthy trader Guman Chand Patwa & his sons, whose trade extended among Afghanistan & China. It is the most intricate & outstanding of every Haveli in Jaisalmer & is practically the pride and joy of Jaisalmer well-known architectural affluence. The statues on stone far exceed in attractiveness then toil on brocade & gold. Later in evening move 40 km away from Jaisalmer to Sam Sand dunes to get the real sense of great Thar desert and have camel ride with the option of enjoying the ethnic Rajasthani cultural dance and food. Later in night back to the hotel for night stay at Jaisalmer.

Day 07: Jaisalmer – Jodhpur (280 kms / 5 hrs)
On day 07, you will be leaving for Jodhpur, the blue city situated at the edge of the Thar Desert with tales of relic in the depletion of the desert. You will be passing through the desert attraction on the way as you move towards Jodhpur. A typical rural Rajasthan view, women in their colorful long skirts with men wearing dissimilar color turbans can be seen all through your journey. Upon arrival check in the hotel, later visit Mandore gardens, the previous capital of Marwar and Umaid Bhawan Palace, the present residence of the king of Jodhpur. Overnight stay is in Jodhpur.

Day 08: Jodhpur – Udaipur (275 kms / 06 hrs)
After breakfast drive to Udaipur and make a halt at the fields to see the local way of agricultural and irrigation. By late evening you reach Udaipur and check in at your hotel for overnight stay.

Day 09: Udaipur Sightseeing
Today after breakfast in the hotel, visit the City Palace, a fascinating compilation of structures added by a variety of rulers after Udai Singh & erected in the year 1725. Then visit Sahelion ki Bari also described as the backyard of Maids of Honour. It is a decorative garden laid out by Maharana Sangram Singh for his daughter & the females of the Queen's patio. The garden is decorated with a number of fountains, pool & colourful flowers. Later visit Jagdish Temple, constructed in 1651 AD in Indo – Aryan architecture by Maharana Jagat Singh. It is the biggest & the most gorgeous place of worship in Udaipur. In evening also enjoy boat ride on Lake Pichola and sight the Lake Palace & Jag Mandir, the two islet palaces on the lake appears similar to gems in the lake. In evening back to the hotel for night stay at Udaipur.

Day 10: Udaipur – Jaipur (419 kms / 06 hrs)
After breakfast drive to Jaipur Later in the evening you will be leaving for Jaipur, upon arrival check in at the hotel for overnight stay.

Day 11: Jaipur sightseeing
Last city tour we take on today is to Jaipur – prevalently known as the Pink City and also the capital city of Jaipur. Jaipur is one of the most significant inheritance towns in India. On your arrival first visit the massive Amber Fort – the palace compound which situate to this date was originate beneath the supremacy of King Man Singh. Here sit on the Elephant back and enjoy the ride up to the entrance of the fort situated on the top of steep hill. Later we visit the City Palace, a great mix together of Rajasthani & Mughal construction. The middle of the citadel is a seven-storied structure called Chandra Palace, which offers the fine view of gardens & the city. Later we visit planetary observatory known as – Jantar Mantar, in last visit the Hawa Mahal called as Palace of Winds, a five – storied building made up of pink building material, put up in 1799 for royal women, so that they could observe the delegations, markets etc from its 953 small windows. Evening shop till you drop in the sprawling markets of Jaipur, one can pick handicrafts, traditional clothes, jewellery and precious gems and stones. Overnight stay is in Jaipur.

Day 12: Jaipur – Agra (238 kms / 5 hrs)
Morning leave for Agra, enroute visiting the ghost city “Fatehpur Sikri”, made up with red sandstone it is a veritable fairy story city and its "ruins" are in perfect shape till date. The abandoned city constructed as real legend city it had served as the capital to the Mughal emperor Akbar for a short period before it was shifted back to Agra due to scarcity of water. Upon arrival in Agra check into hotel for relaxation and wash & change – the city of famous for housing one of the Seven Wonders of the World - Taj Mahal. Today Agra placed as a monumental town covering few splendid structures in it. Even today Agra reflects its Mughal heritage clearly through various structures. By early evening visit the world famous love monument Taj Mahal, it is spiritual building attracting millions of tourists all around the year. This great this monument took twenty two years to build with approximately 20,000 workers. Also remember that imprinted figures that were once overstated with costly stones and jewels. Overnight stay is in Agra.

Day 13 Agra– Delhi (204 kms / 05 hrs)
After a lovely night have your breakfast at the hotel and after that take a small trip with your guide to Agra Fort - an enormous monument ensconced with lots of notable palaces, gardens and mosque in it. You will see a wonderful view of the loving monument from the fort, which is the main attraction. Later visit Itmad-ud-Daulah Tomb constructed by Empress Noor Jahan in the reminiscence of her father. The interiors of the tomb are worth to see, as they are measured better than Taj. Later drive to Delhi to the airport to take the flight (depending on flight timings). 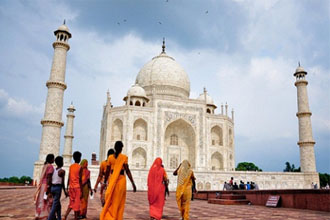